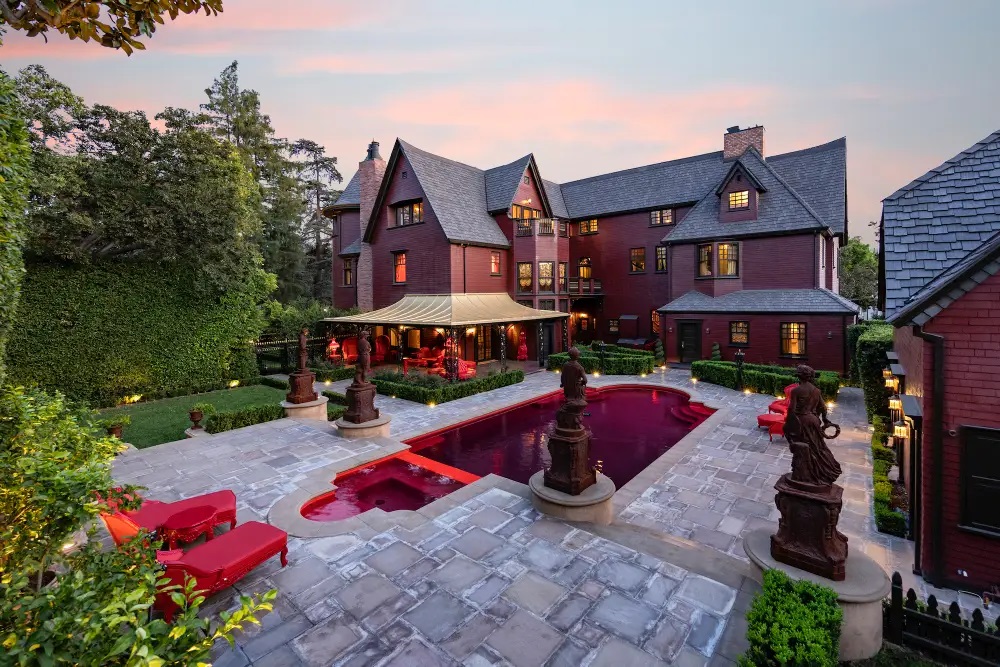 Celebrity tattoo artist and beauty mogul, Kat Von D, is selling her gorgeous home in Los Angeles, California. The 3-story crib is 12,565 sq. feet with 13 bedrooms and 10 bathrooms and is on the market for a whopping $15million.

Kat paid $6.5 million for her Victorian home back in 2016 and she’s spent a lot of time improving it since then, updating the interiors with unique features like a library, hidden bar with hand-carved walls and 7 fireplaces.

Known for her unique sense of style, Kat’s home truly captures her flair for the dramatic. Her historic Gothic mansion features a spa and a blood-red swimming pool.

There’s also a living room which Kat calls “The French Ballroom” and a 2-bed, 1-bath carriage house over the garage.

Kat announced she was leaving California for good to put down roots in Indiana. This isn’t surprising considering that back in October, the talented beauty said it was time “to leave Los Angeles.”

Kat rose to fame in 2005, after starring on reality TV show Miami Ink. She later had her own spinoff LA Ink which followed work at the High Voltage Tattoo studio she opened up near Hollywood and even started a career as musician accumulating a reported fortune of $30 million. With this money Katherine bought herself one luxurious mansion located just outside Los Angeles’ Hancock Park neighborhood.

When Kat bought the property, it was pretty special – kitted out with hand-carved walls, stained-glass windows, mirrored fireplaces and chic hardwood floors. Yet design-wise, the house wasn’t quite to the TV star’s tastes, so she undertook a dramatic home transformation, which took a team six years to complete. Clearly no expense was spared, because every room is now elaborate and flawlessly finished, especially the ballroom.

The 2003 family comedy, Cheaper by the Dozen, highlights just how much the mansion has changed since Kat snapped it up. The property was featured as the set for the film, which starred Steve Martin and Hilary Duff, and at the time it was grand and light-filled, but nowhere near as quirky as it is today. Despite extensive remodeling works, Von D took inspiration from the home’s history and was careful to be sensitive during the renovation works.

From fireplaces to flooring, furnishings and light fixtures, no detail has been spared. This is especially highlighted when stepping into the home’s dining room. With its wood-lined walls, decorative ceiling, stained-glass windows and crimson red details, it’s the ultimate space for hosting.

Jamie Sher, founder and principal of The Sher Group holds the listing.